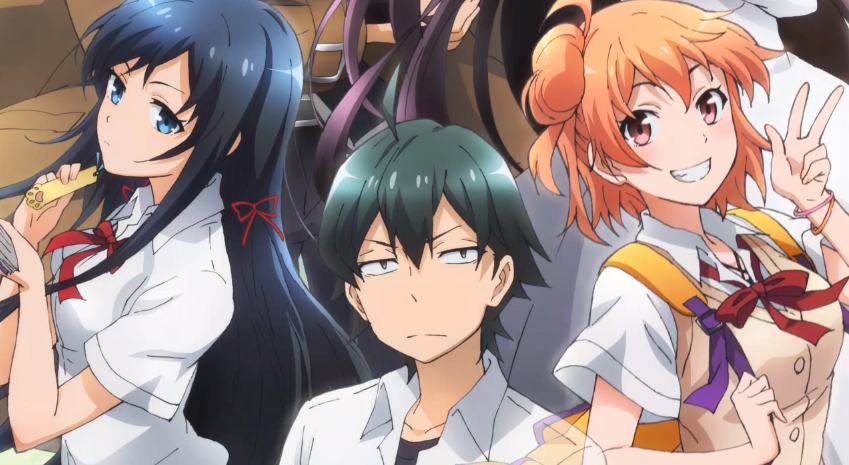 At Your Service: ‘My Teen Romantic Comedy’ Review

I had high hopes for this romance slice-of-life anime produced by Brain’s Base, despite not really knowing of the studio at the time of watching. Sadly, these high hopes were crushed somewhat throughout my run of My Teen Romantic Comedy, but paticularly towards the end of the series.

Following the lives of two loners – Hachiman Hikigaya and Yukino Yukinoshita – who, despite their varying personalities, offer their help and advice to other students as part of their school’s “Service Club”, often assisted by the cheerful Yui Yuigahama, My Teen Romantic Comedy – hereafter named SNAFU – depicts various situations that may occur in everyday high school life.

The main protagonist, Hachiman, is a complete narcissist, quite repulsive and there is nothing really that is going to change that any time soon. Yukino is ice cold, often disgusted by how naïve people are. To a certain extent, Yukino and Hachiman aren’t too different, however we are then introduced to Yui – a cheerful, quite naïve, outgoing person who aspires to be like those around her. You can look at these characters in two ways, as the anime does. Firstly, you can think that Hachiman and Yukino are a match made in heaven due to their similarities. On the other hand, you can see them being too toxic for each other and that the opposites between Yui and Hachiman are more ideal for one another. The series fluctuates between the two pairings, with perhaps a slight bias on the Yui and Hachiman pairing. Personally, I saw more possible romance between Yui and Yukino, and Hachiman and Saika – one of the more feminine characters throughout the series who enjoys playing tennis.

Without giving too much away, the ending of the series doesn’t really conclude too well. Sure, there’s a second season, but I wasn’t too eager to start the second season at all. In fact, I probably won’t ever watch it due to the disappointment this first season gave me. SNAFU calls itself a ‘romantic comedy’. Okay, so there are a few cute moments between the characters, but there’s nothing more romantic than a couple of hands holding. If you’re expecting a cute kiss scene at the end of the series, let me tell you – there isn’t one. If you’re expecting a cute scene with them falling asleep on each other’s shoulders, there isn’t much of one of them either. As for the comedy aspect, I was disappointed on that front as well. I didn’t find myself laughing that much. So, with no signs of laughter or signs of aweing over the cute romantic moments that I was expecting, I have to argue that this isn’t a romantic comedy at all.

So, what is this series? I’d honestly call it a slice-of-life with a fairly decent OP and not much in between. The storyline isn’t the best and the characters use the same ‘jokes’ quite repetitively. If you’re looking for a in-depth series, this isn’t it. This is, as a user named SwamiJesus puts it over at MyAnimeList, if you want to watch something for “shits and giggles”. If you want to watch something with a little more sustenance to it, keep searching. This definitely isn’t it.

Where can I watch this?

My Teen Romantic Comedy (SNAFU) is available to watch on Crunchyroll, HiDive and AnimeLab, depending on your region.

2 thoughts on “At Your Service: ‘My Teen Romantic Comedy’ Review”