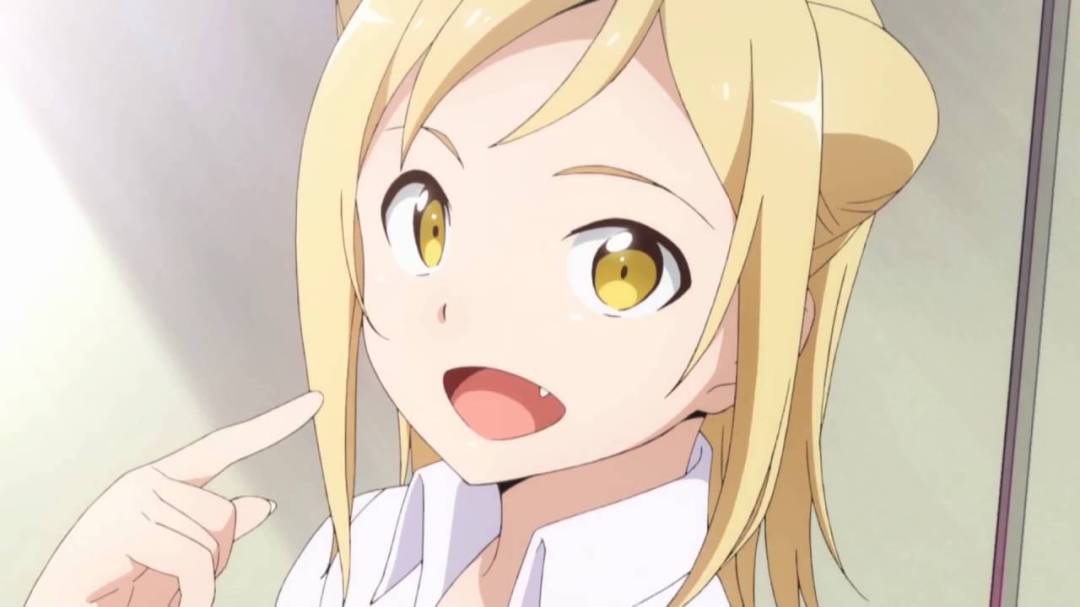 We’re currently half way through the Winter 2017 season (for the most part), so it’s time to see what the shows that I’m still watching are and to see whether I’ve dropped any!

Seiren
I watched the first episode of Seiren with hardly any expectations. It’s a spin-off of Amagami SS, a slice-of-life, comedy, romance anime based on a dating simulation game released back in 2009 for the Playstation2. I can’t say I’ve watched Amagami SS or played the original game, so I was going into Seiren completely blind, excluding the amount of hype it was getting from the Amagami SS fanboys. I found the characters in Seiren to be, well, dull. They appeared to be troupe-like as they can be, with no other dimensions to them at all. I’m not a particular fan of the animation-style either, although that certainly looks like to be a nod towards the original, main series. From the first episode, although perhaps unfairly, I could quite quickly tell that I wasn’t going to enjoy this show – it was too predictable and boring – and it was dropped. Perhaps if someone can sway my opinion, I’ll try watching it again, but for the time being, this isn’t one I’ll be picking up again any time soon.

Masamune-kun no Revenge
I still stand by what I said in my first impressions post about this series – the animation style is so lovely and fresh, with the animation of the weather in the show, particularly the rain, perhaps being some of the nicest weather animation from this season. Although I haven’t been keeping up with Masamune-kun as much as the other series I’ll be writing about in this post (I’ve recently only finished the third episode), it’s still definitely one that’s on my radar to continue and finish. It’s a little bit unpredictable for me at the moment with everyone’s motives and which direction the show is going to take, but this isn’t a serious show and I’m not watching it as such, unlike the majority of the shows from this season. It’s a nice little break from the dramas of others and for that reason, I’m certainly keeping it on my watch list.

Spiritpact
This was a disappointment and a half. Like I’ve previously mentioned, the premise of this show was great and I was quite hyped for it, but I was left disappointed by bad scripting and voice-acting and dropped it, similarly to Seiren, after the first episode. But I feel bad for doing that with this show and I don’t understand why. Reading other people’s reviews on this series, I felt bad that I couldn’t find the motivation to continue watching after the terrible first episode and I’m pretty sure no-one could blame me. But from what I’ve read and seen, the series isn’t well-produced at all and is downright terrible in visuals and voice-acting at times (trust me, I even watched the first episode in its original Chinese and it’s still bad). Unless you’re willing to put up with all of this, I wouldn’t really recommend it.

Demi-chan wa Kataritai
This show is adorable. It is without a doubt the cutest show of the Winter 2017 season. Hikari continues to be adorable, Machi is great and the other demis are just as fun. Takahashi-sensei is a teacher that every school student deserves to have the pleasure of knowing; he’s so kind and cool, he’s one of the teachers that everyone could get along with. Demi-chan is an important series, really, as it deals with the problems of discrimination and bullying particularly within the school environment. The animation used in this series, similarly to Masamune-kun, is nice and refreshing and the use of CGI just emphasizes this. Despite there being some questionable teacher-student relationships in this show, it’s certainly one that I am going to continue to watch, for I’m quite intrigued as to how the rest of the story pans out as this is something that hasn’t really been made too clear in the episodes that I have watched thus far (again, like Masamune-kun, I am slightly behind – I recently finished episode four). 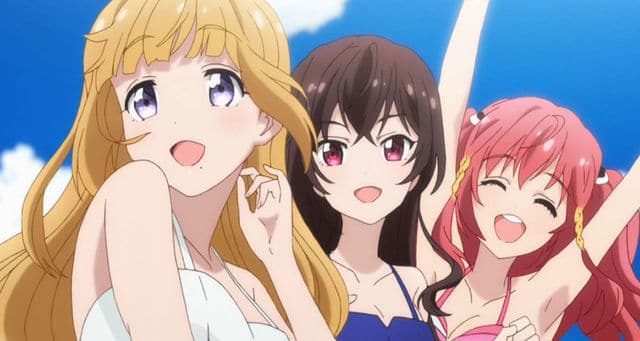 Idol Jihen
There is only two words to describe this show: guilty pleasure. The concept of this show isn’t all too weird, really – idols being a part of the Japanese government seems to be on a similar sort of level to a reality TV-star being President, right? – but the actual show has blown this out of proportion. From what I can tell, each episode just gets crazier and crazier, but the theme of staying optimistic is there throughout, making it quite a nice show to watch when you’re struggling to find motivation to do important things, such as university work (totally not speaking from experience there at all…). Episode 3’s story of the island of cats was a bit lame, really, and the questionable scenes from the fourth episode made me cringe somewhat, but the music is catchy and the animation is lovely, so despite the storyline of each episode gradually getting worse and the characters being quite samey-samey, there’s still something at least that keeps making me want to watch it. Then again, I am complete idol trash, so that explains a lot, really…

Gabriel Dropout
As mentioned in my Winter 2017 First Impressions post, I wasn’t too happy with Gabriel Dropout. The puns for names, the style of the show itself, what seemed to be a lack of story… Everything negative was just pouring itself out to me with hardly any positives showing at all. After having expressed my opinion to others, people have suggested that I’ve been quite harsh with this show. It’s been said that the show does in fact get better in terms of comedy, however, what puts me off is the lack of overarching plot that still seems to be there. Will I try watching this again? Perhaps. I’ll just have to be in the mood, I suppose.

BanG Dream!
This show wasn’t airing when I made my First Impressions post, so there’s a lot to catch up on here! The first thing to mention is that the animation style for this show is one of the best for this season. I realise that I tend to big up a lot of shows because of their animation styles, but the animation style of this show is on the next level, especially the CGI, which is so much smoother than the CGI used in other ‘idol’ shows. I place the word idol in inverted commas for the mere reason that it’s not quite an idol show. Imagine Love Live! with the music from K-ON! and that is BanG Dream! on basic principle. Speaking of which, the music featured so far in this show has been amazing. The OP is an incredibly catchy song and the insert songs which have been featured in these episodes have been great, but that’s not the only great thing about the sound in BanG Dream!. The most prominent feature of sound in this show is how realistic it is. In the first episode, a lower volume is applied on the voice of Kasumi to make it more realistic to actually being in a crowd at a gig instead of the unrealistic usual voice volume, all of which is to show that Arisa can’t hear her properly. It’s something so simple, but I found that this was a really good little feature that made the show have a great first impression for me (as well as the characters, animation and everything else, of course!). The show hasn’t really shown many faults thus far and hopefully it continues to maintain this. If you’re looking for a music show this season, this is definitely the one you need to watch.

Kuzu no Honkai
And, as the saying goes, I’ve saved the best until last. Kuzu no Honkai (also known as Scum’s Wish) has proven to be quite controversial this season. I can understand why, most certainly, but it’s by far my favourite show of the season – it’s the only one which I watch as soon as it’s available. Like BanG Dream!, this began airing after my first impressions post, so there’s a lot to catch up on! (Not only that but KnH is the show which I’ve made the most notes for – that review is going to be great, let me tell you!) The show deals with heavily mature themes, hence the controversy it’s caused. It involves sex, sexual advances and even includes homosexuality, something that’s quite rare in anime itself. Despite this, I do believe that most people will be able to relate to at least one character or situation within this show, whether it’s having a crush on a teacher, being in love with your best friend or just simply having gone through unrequited love. The animation style is gorgeous; the tonal, sketchy feel to it reminds you that it is completely fictional, but somehow there’s also a hint of realism in it, in a way I can’t quite put in to words. It’s a weird mix, but it works so well and I love it. The series shows how different situations and actions can cause the opposite gender to feel with emotions such as jealousy and awkwardness taking centre stage. I can’t wait to see where the series goes as I love every aspect of it and, really, I know for a fact that there’s going to be a void in me somewhere when it’s over with.
With the shows that I’ve kept on watching, things are looking quite positive! I am hoping that the questionable aspects of Demi-chan amongst others aren’t as exploited as I predict they probably will be, though. I’ve watched the first episode of Kobayashi-san Chi no Maidragon also, but that’s definitely not enough to write about an entire series on! Whether I continue that or not really does depend, though, as I found the first episode quite cringe-worthy, however it’s still on my radar for the time being, albeit not a priority.
I can’t help but feel as if I’ve missed out a lot from this season still, though. Perhaps I’ll have another look at what’s out there and pick up some more things. Saying that, I struggle to keep up with the shows I’m currently watching, so perhaps that’s not a good idea. ^^”
What about you, though? What are your opinions on this season’s anime? Let me know in the comments below!
Until next time!
– Amelia xo