The Summer 2017 anime season is almost upon us, yet I’ve been quite quiet on the ‘this is what I’m watching’ front. So, what’s my plan for this upcoming season?

Personally, the lineup for the next season isn’t exactly attention-grabbing. Sure, there’s a couple of shows that I’m interested in but definitely not enough to warrant a post following my usual format of a top ten list. Regardless, what am I actually watching this season?

Kakegurui, a psychological mystery anime based around a school which has a curriculum based around an awful amount of gambling, has definitely caught my eye this season, mostly due to the curiosity I have about it. Another series that I’m extremely curious about this season is 18if, which, apart from knowing its original source is a game and that it’s part of a multi-media project, I know nothing about. What caught my eye about 18if is the poster for it, so hopefully me being curious will be a good thing after all and I’ll get to know a pretty good, if not a pretty underrated, anime.

Koi to Uso is also an anime that is on my radar for the upcoming season. Despite the synopsis and vibe giving people similar feelings to Kuzu no Honkai from a couple of seasons ago, readers of the Koi to Uso manga over on the MyAnimeList forums clarify that the two aren’t similar at all, which makes me curious as to what route Koi to Uso goes down. Sure, I could read the manga and find out, but I already have loads of manga to read and catch-up on. ^^” 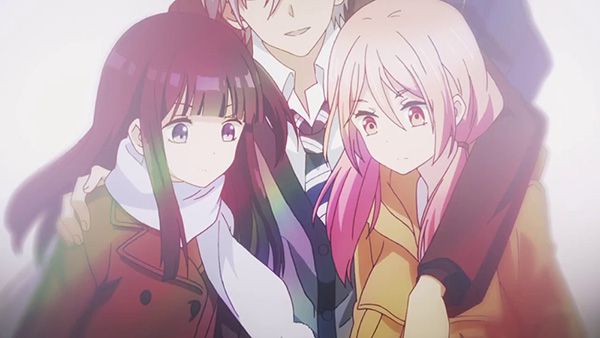 Sticking to the drama genre, Netsuzou TRap is also on my radar, more so now that it’s confirmed to be nice and short at ten minute-long episodes. Much easier to watch! I realise that this might be quite the controversial opinion considering many are removing it from their watchlists at this news, but just because it’s a short doesn’t mean it’s losing any quality – especially if the manga is as slow-paced as people are saying.

Of course, it goes without saying that, alongside dramatic shows, I need a cute romance in my life! Hopefully, Tsurezure Children – a show which follows several stories of youth in love – will be able to fill in this gap. From what I’ve seen so far, it looks adorable. Sign me up.

So, drama? Check. Cute romance? Check. What’s next? Cute boys, of course! Time to mention this season’s obligatory sport anime – Dive!!. Despite getting Free! vibes, and also not particularly liking the popular swimming anime, Dive!! is my sports anime of this upcoming season. Let’s face it – I’m willing to give anything with good-looking guys in a try~ :3c And with popular voice actors such as Nakamura Yuuichi (Amaama to Inazuma, Clannad, Fairy Tail), Takahiro Sakurai (AnoHana, Code Geass, JoJo’s Bizarre Adventure: Diamond is Unbreakable) and Yuki Kaji (Bananyan, Haikyuu!, Kiznaiver), it sounds quite promising, right? Right.

So, apart from the shows listed above, and perhaps checking the anime involving Pikotarou for a laugh (yes, you read that right – the PPAP guy has an anime), what else will I be watching? Well, due to having summer vacation around the corner, I’ll be using this season as a chance to catch up on anime from the last season as well as from other seasons. It’ll be a chance for me to finish Amaama to Inazuma, Kobayashi-san chi no Maidragon and for me to also marathon SukaSuka. Below is a list of shows I’m wanting to prioritise, though, so perhaps you’ll be able to sway me to finish a certain show?~

This season, I also aim to read some manga (and get that section on here started, lmao) and watch some dramas, so hopefully there’ll be more of a variety of content this coming season. (I say that every season, I know…)

What are you watching this season? Let me know in the comments below!

List of shows that I could catch up on this season!