Love Kome is a ‘project’ which focuses on personified rice. You heard me. Personified rice. These rice characters are schoolboys who attend the Kokuritsu Inaho Academy (literally Rice Ear Academy) who are eager to supplant bread as the most popular guys in school.

In hindsight, I should have stopped myself here. I should have read this half of the synopsis and continued on with my day-to-day life, watching something like Tsuki ga Kirei instead. But- no. I continued.

These schoolboys were to form the Love Rice unit and perform at the Harvest Show to show the delicious appeal of rice grains.

That’s right, ladies and gentleman. Not only are the characters in this show personified rice that appear as schoolboys – they’re also school idols. How incredible.

The sad reality, however, is that this show wasn’t as incredible as it sounded. I should have stopped at the synopsis, but I continued. I watched the first episode. I was left confused. I had so many questions. I didn’t know what the heck was going on. But the ED was a jam and so I found myself continuing even still. I was falling down this endless pit of questions:

I had all these questions and more and this was only at the end of the third episode. So, someone please tell me why I continued. Why in the world did I continue watching a show that was so (and this wasn’t the word I wanted to use but it’ll do-) confusing? I felt like I was constantly missing…something. 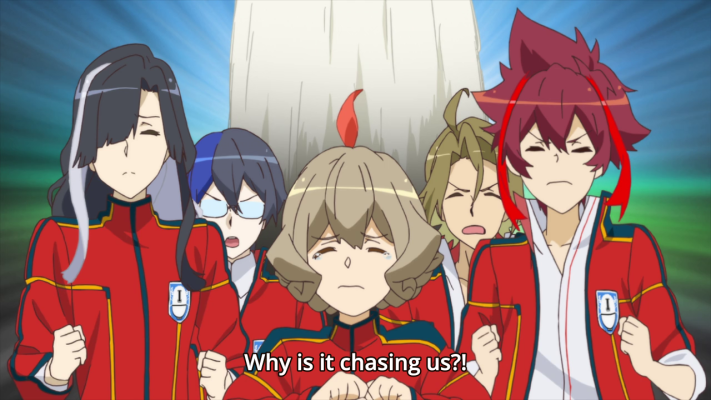 That being said, behind the whole ‘kome’dy’ aspects, the actual show was just your stereotypical slice-of-life, idol anime. It was quite reminiscent of Love Live! actually, in areas, to the point where I stopped watching parts of episodes due to knowing what was going to happen. Of course, the academy is on the brink of being shut down. Of course, the main character’s first reaction is start an idol unit in order to save it. Of course. Not only that, but one of the characters – Nikomaru – also has a bit of a Niko moment. Several times. It’s not just me being a Love Live! fangirl that has this covered either. The Love Kome official Twitter account has also made this connection.

“Please look forward to Love Kome planned by Yaoyorozu who really hates parodies and meta-fictions. The name of the protagonists’ unit, Love Rice is a perfectly original word inspired from the people who love rice. (If the second season is possible, how about naming it Love Rice Sunshine?)”

I mean- okay. You get points there for actually acknowledging the fact that you’ve parodied another franchise, even if you have done it poorly.

Love Kome (I guess moving on to the more technical side of things) have some of the most questionable elements I’ve seen in terms of script work and voice acting. Sure, I get that a lot of the script is made from puns relating to rice, breads and harvesting among other things… but I did definitely have a perplexed look on my face when the fangirls within the show were shouting “Toast me!” And how can I talk about the questionable voices and scriptwork without mentioning the dodgily voiced dog bark in Episode 9? That’s right, folks, some poor guy had to bark like a dog into a microphone.

So, overall, what is Love Kome? Quite frankly, it’s a slice-of-life idol show which tries so hard to be funny and yet fails. I guess it’s a slightly different angle for the Japanese government’s Ministry of Agriculture, Forestry and Fisheries to go for in terms of trying to promote rice eating, but apart from that, I can’t really see it doing anything different to other idol shows that, well, do it better.

Will I watch the second season? I was planning to when it was announced, sure. But now? Probably not. We’ll see.

This post was written as the first installment in my #12DaysOfAnime posts! #12DaysOfAnime is a challenge taken on by loads of anime bloggers, vloggers, podcasters and other people on many different platforms. We just have to post twelve consecutive posts about anything anime-related for the twelve days leading up to Christmas!

Keep an eye out for my other posts that will be a part of the #12DaysOfAnime Challenge! These will cover a variety of topics such as anime reviews, conventions and much more, so there’s going to be something a little different every day!

Hope to see you around!