Is this bad or am I just cynical?: Wakaba*Girl Review

I know Wakaba*Girl has already been covered on A Girl & Her Anime before, but that was a lovely contribution by illintelligence and, well, I hadn’t seen the show myself… Until last month, that is.

Like many other anime fans, I’m all in for cute girls and a nice little slice-of-life comedy series. This is exactly what Wakaba*Girl is. The story follows Wakaba Kohashi, a sheltered girl who dreams of becoming a cool, hip, trendy gyaru all because she admires their outgoing and carefree attitudes. “Great! Character development!” I thought to myself as I read the synopsis, but, uh… Not quite.

Considering it being created Yui Hara – the mangaka behind the adorable Kiniro Mosaic – I was, quite frankly, a little hyped to watch this. Kiniro Mosaic is one of my favourite cute girl slice-of-life shows and, well, I was expecting good things from Wakaba*Girl for this very reason. The bar had been set high not only due to the mangaka being the same but also from recommendations. It was going to be a cute, funny, adorable cute-girls-doing-cute-things slice-of-life and it was going to be great and, well… Not quite.

Without a doubt, the show wastes no time in introducing the characters. We have Wakaba, the sheltered rich girl who dreams of becoming a gyaru, sure, but we also have three more cute girls in the mix. We have Mao, who’s free-spirited and often quite annoying simply for the fact that she refers to herself using the third person. We have Moeko, the innocent one who is, quite clearly, too pure for this world. And then, to contrast literally the entire cast, we have Nao – the token tomboy, the token otaku, the token glasses-wearer… And despite all these token tropes, she still ends up being the best character. Perhaps it’s her sarcasm or her humour, but there’s something about Nao that makes her stand out from the others. It almost felt like Nao was the more developed character out of the four of them. Fleshed out as much as Wakaba should have been, as, you know, the titular character. 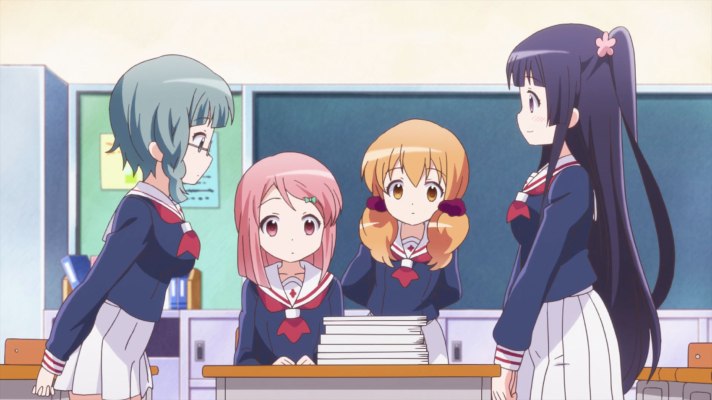 As with most other series with the tag “slice-of-life”, the plot is rather uninspiring, following the daily lives of these high schoolers, but I don’t really find this be a fault. After all, it’s one of my favourite kind of shows. Saying that, however, there was something about the plot that just seemed, well, boring. Sure, I’ll give credit that the show wasn’t episodic, which was something I entirely anticipated, but I just feel like something more interesting could have happened at the end of the show rather than a school festival.

I do think the colours in the show were very well done. They were bright but still remained pastel, a perhaps oxymoron-like palette which I do find very nice to look at. This visual pleasantness is contrasted, for me at least, by the OST. Sadly, as much as I really want to, I can’t bring myself to actually enjoy the OP. Its cheery instrumental and cutesy lyrics is a perfect recipe for the show, don’t get me wrong, but do I enjoy hearing it? Not particularly. The rest of the OST, regardless of how small it is, fits the show perfectly too and is much more pleasing than the OP. Thankfully. That being said, it’s also quite uninspiring at the same time and could be the OST for a countless number of other anime.

Perhaps I’m asking too much of a show that’s merely a short. Thirteen episodes that are 7 minutes long are not going to produce the greatest story on the planet, I understand that. But, even when considering the fact that shorts don’t get as much credit as they deserve at times, I’m still struggling to praise the show high enough to give it a higher rating.

Arguably, it was a studio confidence thing. Nexus, the studio behind Wakaba*Girl, had only previously done Chivalry of a Failed Knight – a collaboration with Silver Link – and an unaired episode of the MapleStory anime – a collaboration with Madhouse. Oh, they did do that movie about Christmas as well, I guess… My point is, Nexus wasn’t exactly a well-established studio at the time Wakaba*Girl came out. They’ve since produced the series Comic Girls, which is, well, a slice-of-life comedy…

So, is Wakaba*Girl really a not so-good show, or am I just becoming more cynical about cute slice-of-life shows the more I watch anime? Well, that’s a question to answer another time. For now, though, I’ll leave you with the rating I’ve given it based off of my experience of watching the show.

You can watch Wakaba*Girl for free on Crunchyroll!

4 thoughts on “Is this bad or am I just cynical?: Wakaba*Girl Review”