Although I had some doubts, it turns out Death Parade is a show like no other. It’s entertaining, sure, but it also makes you think deeply about, well, everything. The only thing left to say in this introduction is, well, “Welcome to Purgatory. “

Purgatory is where Death Parade is set, albeit taking the form of a bar called QuinDecim where the dead come, not only to drink cocktails, but to be judged by the arbiter, Decim, who plays the role of a bartender. Should they go to the void? Or, should they be reincarnated? The synopsis could be longer, but I don’t really want to add anything else here because I’d end up spoiling the show, so let’s move on. 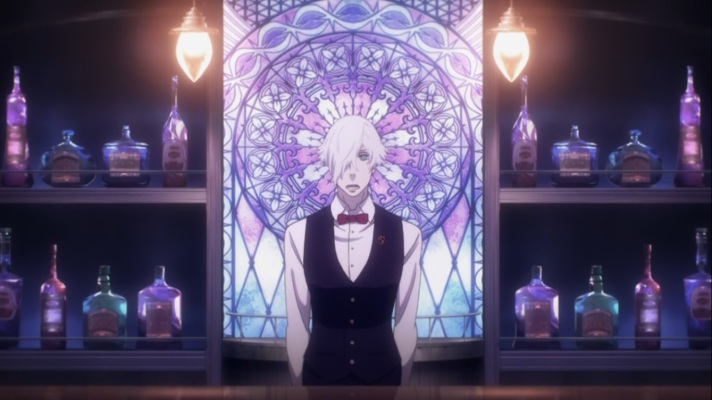 The fun thing about Death Parade is that it involves the viewer somewhat, without breaking the fourth wall and without being explicit. You see, to be judged, the dead are forced into playing a game (air hockey, billiards, darts etc.) that pushes them to the extreme. Initially, they may not know they’re dead. They don’t know how they got killed. They don’t know what happened before. As soon as this is poured out, they may start to lie about things in an attempt to cover their sins up and to try and push towards reincarnation (once they realise the situation, of course). It’s fun for the viewer as it’s almost like a guessing game – who will be reincarnated and who will go to the void?

The games, I believe, are the best part of Death Parade. They are well-structured and all have a good narrative. They’re tense and will keep the viewer switching positions and continuing to guess the outcome. However, as soon as the show tries to be more than this – more than the dead being judged by playing games – the show suddenly drops in quality. There are side narratives involving various different characters, but, sadly, these don’t really amount to anything, nor do we ever get a conclusion for these.

That being said, the narrative between Decim and Kurokami is exceptional. Without spoiling the show, the two of them are pushed to their emotional limits, which, although heart-breaking at times, makes for a great time for the viewer. The show manages to give out so many important messages during this arc and I truly think that the show could have worked a lot better had it focused on these two more than it had. Forget the other storylines – just give me this one.

What I love the most about Death Parade is the cinematography. Everything from the camera angles to the colour scheme and to the mise-en-scene is just perfect. It sets the tone as it should be, creating a creepy vibe that I imagine purgatory would give. The show has a big emphasis of emotions and these are shown splendidly due to the cinematography and the music. The music is always calm at the start of an episode and it gradually becomes more intense as the episode reaches its climax. And how could I mention the music without mentioning the OP? BRADIO’s Flyers will be stuck in your head from the first time you hear it, I can promise you.

Death Parade is definitely worth a watch. It’s intense throughout the entire show, sure, but there’s something in it for everyone. It’s an enjoyable watch and I would have been inclined to rate it slightly higher if it wasn’t for the needless narratives that we got from the half-way point onwards.

You can watch Death Parade on Crunchyroll and on Funimation!

In America? You can also watch it on Hulu and Yahoo Video!

In Australia? You can find it on Anime Lab!