Zombies, vampires, magical girls, ninjas and the afterlife.  Sounds like a concoction you’d find in a nightmare. However, this bunch wasn’t so bad…

Kore wa Zombie desu ka? (or, to give its English translation: Is This a Zombie?) is an anime from 2011, produced by Studio Deen – the same company that produced Hetalia: Axis Powers, Fate/stay Night and the same company that co-produced Fruits Basket. It can be said, without a doubt, that Is This A Zombie? can join the long list of well-produced series from Studio Deen, despite the possible first impressions the audience might have of it. 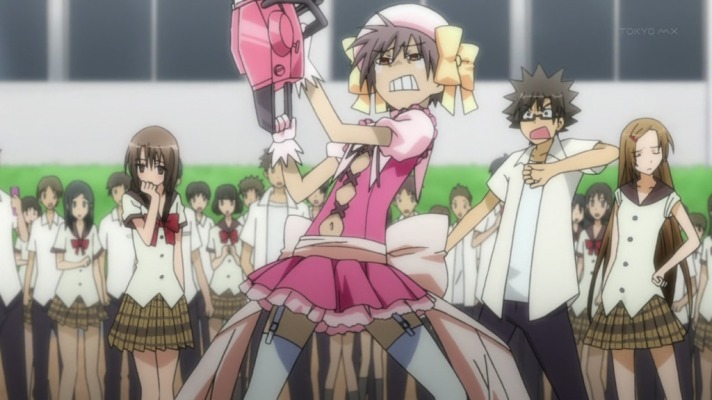 The series follows Ayumu Aikawa, a zombie. Having previously been resurrected by a necromancer named Eucliwood Hellscythe, he tries to make the most of his undead life. One day, he encounters a Masō-Shōjo (literally translated to ‘Magical Garment Girl’) named Haruna and accidentally ends up taking her powers. Now an undead Magical Garment Girl himself – or “cross-dresser” as he’s referred to by outsiders- Ayumu must battle against demons known as Megalos as he tries to solve the mystery of his death. And, living with Eucliwood, Haruna and a vampire ninja named Seraphim, this certainly isn’t an easy task.

It sounds like a load of BS. I know. I honestly thought that this was just “another magical girl show that I’m not going to like”, particularly one that I’d cringe at non-stop. But it wasn’t like that all. Is This A Zombie? proved to be quite humorous, at times serious. It proved that its plots weren’t just about fighting the Megalos, but that they also explored the relationships between different characters and the consequences of actions that people take. Honestly, this show is a parody, yet it’s a good parody. It’s clear that it abuses somewhat the genres of harem and shonen, with pieces of fantasy in, and, honestly? It works.

The characters themselves are a little, well, extreme. On one side of the scale, you have Ayumu who is a little ‘boring’, especially in the way he talks, but if you consider the fact that he is a ZOMBIE, he’s just your stereotypical hormonal high school student who loves girls, really. As previously mentioned, he lives with three girls, all completely different. Haruna, the Magical Garment Girl, is a bit of a loud-mouth . Similarly, there’s Seraphim, who, despite her coldness, like Haruna, insults Ayumu somewhat, often calling him “a piece of shit”. On the other end of the scale, you have Eucliwood, who never actually speaks (for reasons I won’t spoil here). Despite this, Eucliwood is actually a pleasant girl. I mean, you’d have to be if you were willing to resurrect people from the dead, right?

Honestly, this is a series that you simply can’t take seriously. You’re not meant to. It’s a complete parody, as previously mentioned, and this is emphasised more so by the addition of fanservice, implications of yaoi and quite a bit of fujoshi bait, but this is a nice balance. I never once found myself rolling my eyes and sighing a little like I normally do when there are loads and loads of fanservice in a series. For one, I actually finished the series, which also speaks volumes. If you’re not interested in fanservice, but quite fancy watching the series, completely skip the final episode. The majority of this is fanservice and, although you’ll be missing out on a beautiful piece of music within the episode, the episode can be not watched and you won’t miss out on any storylines, from what I can tell. The first season’s story finishes nicely in episode 11 quite nicely. Another thing you can’t exactly take seriously is the language that is used, especially in the English dub version. This is one of the rare occasions where I watched an entire season in the dub version and not the original Japanese version, but I did pick up on some language use that some viewers might find offensive, such as the repeated use of the word ‘tranny’ by several characters as they refer to Ayumu. Just something to consider. 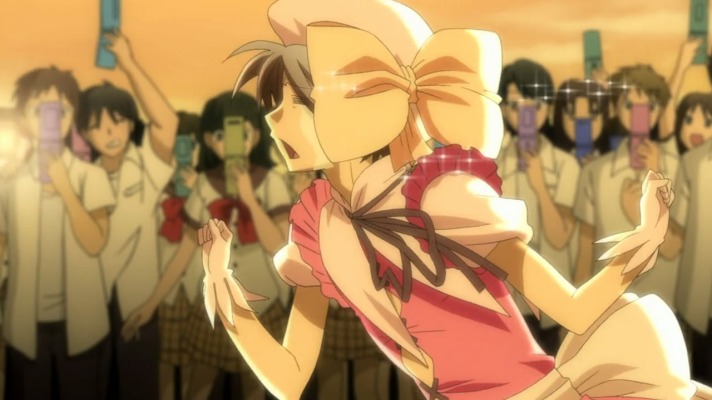 This is a two-season anime, the second season being called Kore wa Zombie desu ka? of the Dead. There are also two OVA’s for this anime. Although I’m reluctant to watch the OVA’s due to some past experiences and the nature of the actual anime, I would probably watch the second season of this show. That isn’t something I would have thought I would have said when I first started watching it, but the show pleasantly surprised me and I know for a fact that there are a couple of things of which I need the answer to still! Hopefully, the second season, whenever I watch it, will answer those questions of mine…

So, do I recommend Kore wa Zombie desu ka?? Sure – if you don’t mind mild parodies or series that include quite a bit of fanservice. Don’t think that because it has zombies and vampires involved that it’s scary, because as you’ve probably gathered from the pictures, it’s not. Not at all. This is a series that you’d watch if you don’t want to concentrate too hard, but it’s not one that I’d say would show the ‘best’ of anime.