3 Harem Anime You Should Know About || Anime For All

This week, we’re looking at a genre with less options than most, but the characters have plenty of options… That’s right – it’s the harem genre.

I’ve mentioned a couple of good harem shows already in my Anime For All series – Ouran High School Host Club, for instance, in the Comedy post. But, with a post dedicated to the genre, what am I recommending this week? Well, this week, I’m featuring Kami nomi zo Shiru Sekai, Yamada-kun to 7-nin no Majo and Nisekoi.

These series are available to stream on the following sites:

Please be aware, as always, that there will be some regional differences!

I’ve picked these three shows based on the fact that they’re different from one another and that they appear to be quite popular (to the extent where they all have more than one series or at least additional episodes than the original TV series!). So, let’s see what they’re about, shall we?

Kami nomi zo Shiru Sekai follows Keima Katsuragi – also known as the God of Conquest – the boy who can capture any girl’s heart. At least, he can capture any girl’s heart in dating sims. In reality, he has an unhealthy obsession with galge games – a type of Japanese video game centered on interactions with attractive girls. When he arrogantly accepts an anonymous offer to prove his supremacy at dating sims, he’s misled into helping a naive and impish demon named Elsie with her mission: retrieving runaway evil spirits who have escaped from hell and scattered themselves throughout the human world. Keima soon discovers that there is only one way to capture these spirits and that’s conquering the thing he hates the most – the unpredictable hearts of three-dimensional girls! The God of Conquest is thus put to the ultimate test as he is forced to navigate through the hearts of a multitude of real-life girls. Approximate time to finish: 15.2 hours (for all seasons) 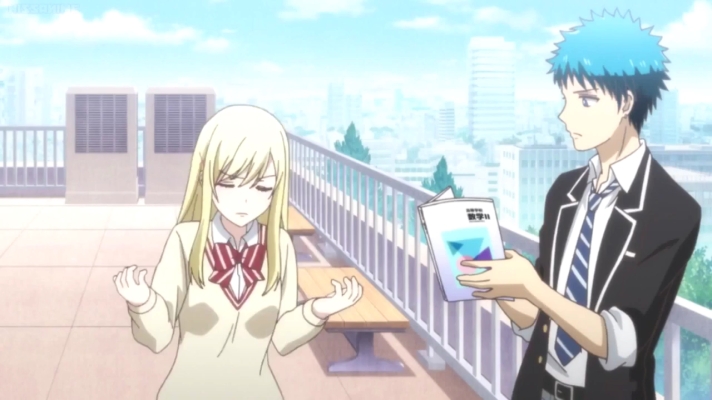 Yamada-kun to 7-nin no Majo follows Ryuu Yamada as he attempts to turn over a new leaf at his new school Suzaku High and leave his delinquency in the past. Now a second year, Yamada is now bored and slowly reverting to his old self. One day, he encounters on the Honors student, Urara Shiraishi. A misstep causes them both to fall down the stairs causing an accidental kiss! Because of this accident, the pair discover that they can switch bodies with a kiss, something that might turn out to be useful or just be simply troublesome. Learning of their new power, Toranosuke Miyamura, a student council officer and the single member of the Supernatural Studies Club, recruits them for the club and eventually the group unearths the legend of the Seven Witches of Suzaku High, seven female students who have obtained different powers activated by a kiss. The Supernatural Studies Club embarks on its first quest: to find the identities of all the witches. Approximate time to finish: 4.8 hours

And finally, Nisekoi follows the daily antics of Raku Ichijou (the sole heir to an intimidating yakuza family who is wanting to stay away from his yakuza background) and Chitoge Kirisaki (the beautiful daughter of the American Bee Hive Gang’s chief) – a mismatched couple who have been forced to get along for the sake of maintaining the city’s peace. Ten years ago, Raku made a promise to his childhood friend. Now, all he has to go on is a pendant with a lock, which can only be unlocked with the key which the girl took with her when they parted. With many more girls popping up his life, all involved with Raku’s past in some way, his search for the girl who holds his heart and his promise leads him in more unexpected directions than he expects. Approximate time to finish: 12.8 hours

That’s it for this week’s Anime For All! What do you think about these recommendations? Do you have any of your own suggestions? Leave them in the comment section below!