Anime has been used for a lot of things. We see it for series made for TV, movies and even video games. So, why not use it as advertisements as well?

This is a topic I’ve not really thought about until recently. The thing is, I have no issue with anime being used as a medium to advertise something. I see why they do it – anime has been known to appeal to all demographics. The style is (usually) suited to both adults and children, men and women. Not only that but we can now add location to this list. It doesn’t matter whether you’re Japanese, British, Australian, French… Anime is now global and that makes it such a great media to use in advertising.

Saying that, however, how effective is anime in the form of an advertisement? For now, I’m going to be looking at three very different anime in order to compare, contrast and hopefully come to form an opinion. 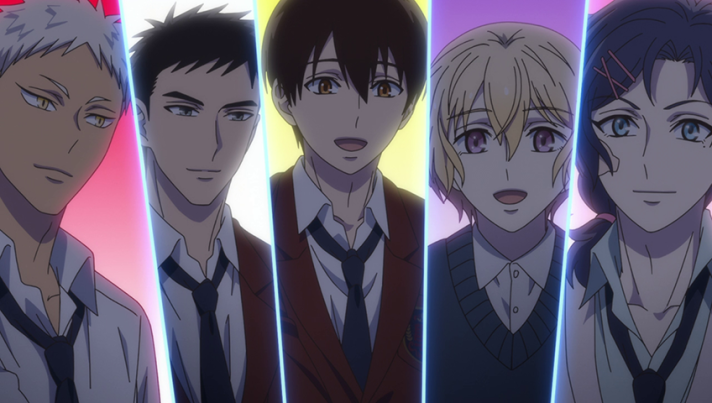 Firstly, I’m going to talk about Sanrio Danshi – the topic of my last review which you can read here, if you haven’t read it already. Now, I knew from the get go that this would be a huge advert for Sanrio. And you know what? It somewhat worked. The show was engaging and entertaining enough in its own right, but the viewer was also introduced to Puroland – Sanrio’s answer to Disneyland. Thus, Sanrio weren’t just advertising Hello Kitty, Little Twin Stars and the other characters featured in the show, but they were advertising their theme park as well, clearly trying to show off and get people to visit.

What I’m surprised about, though, is that there were no mention of Sanrio’s newest character, Marumofubiyori (or Moppu). I would have thought that, if Sanrio were to be advertising all they offered, they surely wouldn’t just stick to some of the now older characters. I guess, on the other hand, they had a second Aggretsuko anime premiering in the following season, continuing to advertise a relatively new character (Aggretsuko debuted in 2015). By this pattern, could we perhaps see a Moppu anime by 2020?

Nevertheless, let’s move on. As much as I’d love to discuss Sanrio, we have two more anime to talk about. Everyone’s heard of Sanrio, sure, but everyone’s also heard of Studio Ghibli – a studio who have also produced anime for the mere purpose of advertising. 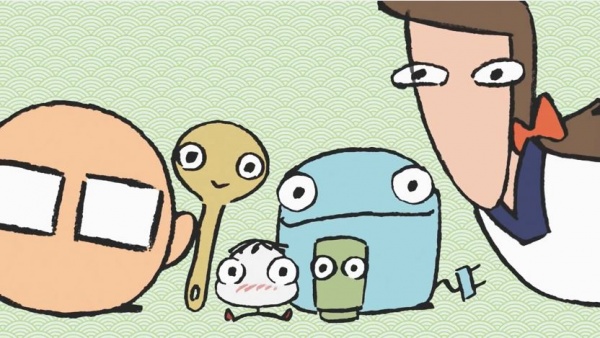 That’s right. In 2016, Studio Ghibli were comissioned by the beverage company Ito En to create some adverts and to create a mascot.  This project became known as Tonari no Onigiri-kun. Admittedly, in true Ghibli style, it was nicely drawn and everything, but… It didn’t particularly make me want to buy some oolong tea or anything. Then again, the three commercials were only eighteen seconds long each. Compared to Sanrio Danshi, that’s not long at all. In fact, that’s shorter than most, if not all, adverts shown on British TV. So, my question here is, does the duration of the advert really matter? If it doesn’t, I can guarantee that Ghibli could have done a lot better.

Admittedly, I’m not in advertising, so I can’t really say, “Oh, they did this wrong” and “Oh, this could have been done better.” I’m only here to discuss these adverts from a consumer’s POV. Did Tonari no Onigiri-kun make me wnat to buy tea? Not at all. Did Sanrio Danshi make me want to go to Puroland? Absolutely. 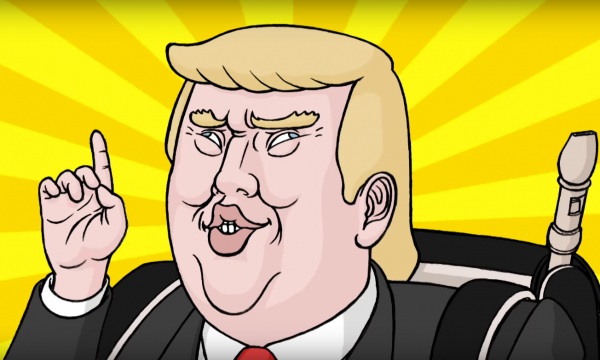 Finally, I want to discuss the third and final anime on my list. It isn’t an advertisement by definition, but it’s context can certainly influence an audience and their opinions. The show in question is Yo! Daitouryou Trap-kun and this is a show that parodies the US President, Donald Trump, showing him as a high schooler that raps.

Don’t get me wrong, the synopsis itself sounds incredible and it’s certainly a unique show, but it also presents Trump to be somewhat comedic and trivial, which is already quite present in the media. Again, I can’t speak for the Japanese media as, well, I’m not Japanese, but certainly in the West we get bombarded with headlines that trivalise him somewhat. (See the blimp that flew over London on his recent visit, if you haven’t already…)

Therefore, I don’t think Trap-kun is/was trying to be an advert for Trump, but rather a show that wants to say “Look at how stupid this guy is.” Now, I’m certainly not attempting to get into a political discussion by any means – that isn’t the purpose for sharing this. I simply chose this example to propose a question: does anime have the same ability as other media forms in, perhaps not manipulating, but forming our ideas and opinions?

It’s no secret that anime certainly has its place in advertising, but does it work better than non-animated advertising, for example? Does it perhaps depend on the targetted demographic? What are your thoughts on this? Let me know in the comments below!

3 thoughts on “Using Anime as Advertisements”