I like a good crime drama, and I certainly like a good romance. Add a sprinkle of vampires here and there and, well, you get Devils Line.

Devils Line is probably one of the only anime from this year (so far) that I probably stand on the minority side of things. A lot of people haven’t given Devils Line a particularly good review and, although I can understand why people may not like it, I have to disagree completely.

For those of you who are completely clueless, Devils Line is a supernatural crime show. It features Tsukasa, your normal everyday university student, and Anzai, your not so normal cop. How come? Anzai is half-vampire. So, humans and vampires are co-existing. As you may expect, this comes with some consequences. Vampires and their advocates tend to face a lot of discrimination and humans, well, tend to get mauled to death when vampires are provoked by the sight of blood. As a result of the discrimination, there are groups out to reveal vampires for the monstrous creatures they really are, but can Anzai and Tsukasa beat the odds and show everyone that not every vampire is evil? 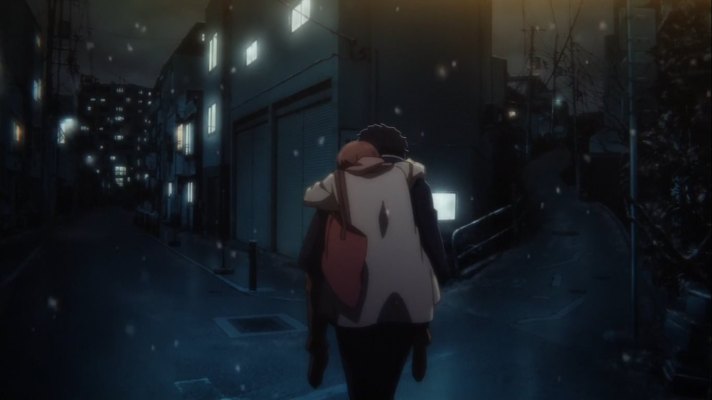 Move out of the way Twilight, a better vampire love story is in town.

That’s not to say that the romance in Devils Line is good. It’s somewhat decent, but it’s not exactly Romeo & Julliet. A lot of the issue with the romance comes from the characters themselves. You have Anzai who is capable of looking himself, apart from his bloodlust being half-vampire: he’s self-efficient, he looks out for others… He’s a fairly alright guy. And then, you have Tsukasa. Tsukasa, the forever damsel in distress. She constantly needs saving. Constantly. And, of course, she is always saved by no other than Anzai. What a load of clichéd rubbish. Saying that, however, the relationship between them when there’s no external factors, no damsel in distress or danger to either of them, is quite endearing to watch. It’s a rather quickly paced romance, all things considered, but they’re certainly not the worst couple I’ve ever seen in a romance.

The action in Devils Line is actually pretty alright. Perhaps I can say this because I’m not one to watch many action shows (although that will be changing!), but the action in the show was genuinely nice to watch. It’s because of this that I was never bored with the show. It wasn’t necessarily showing you physical fights every episode – although it wasn’t far off – but there was always something happenening. So much so, that the show never failed to end on a cliffhanger. They weren’t always the best by any means, but I have to give the show some credit for at least trying.

There’s certainly not a shortage of characters within the show, but the majority of them are somewhat unique in personality. There are couple that don’t really stand out, but these are predominantly secondary characters anyway. A personal favourite of mine is Johannes Kleemann – a half-vampire just like Anzai but with a lot more optimism and much less edge. Johannes was certainly like a ton of fresh air had just been blown into the script and it was certainly welcomed. The character designs are nothing particularly special, but all of the characters are voiced superbly and special shoutouts go to the voices of Anzai (Matsuoka Yoshitsugu who you may also know as Sora from No Game No Life) and Julianna Lloyd (Sawashiro Miyuki who you may know as Celty from Durarara!!).

The OST for the show is pretty good too. Personally, I never really took much notice to any background music (and now I’m regretting that!) but the OP and ED are great for the show. The OP is by Shouta Aoi, who also features in the show as one of the members of the CCC. This is completely different to Shouta Aoi’s usual image, for the song gives me a sort of Death Note vibe and, really, that’s not a bad thing, even if his usual sound is more traditional or acoustic in sound. The ED is a calmer song and is rather peaceful. Sang by Mamoru Miyano, who also features in the show, it’s the perfect contrast for the OP and it’s this sort of OP/ED combination that I love the most.

At it’s core, Devils Line is quite average-looking. It’s not the best story, it doesn’t have the best characters and it’s background music is fairly unnoticeable, if it’s there at all. However, the enjoyment I had for this show really does pull it up. I was never bored whilst watching, I was constantly entertained and I could watch multiple episodes in one night. I can’t help but give it the rating I’ve given it, purely because I enjoyed it so much. It wasn’t a struggle to watch and it was a nice little vampire romance that took me back to being thirteen and being obsessed with the genre.

In the UK, US, Canada and Australia you can watch Devils Line on HIDIVE.

You can also watch it on Hulu! (US only)