Fruits Basket really doesn’t slow down with the emotions, does it? It’s certainly not a bad thing to feel every single emotion in one episode by all means, but Fruits Basket does it so well, I swear.

Like I said in my Episode 5 review, the emotions were only just starting to come out, and I think it’s a good job that I’ve paired up the sixth and seventh episodes in one post here. In the sixth episode, we meet Hatori Sohma and we definitely get to know him in the seventh with, of course, a very emotional backstory.

First things first, though, let’s look at Episode 6. Such a great episode. (But when have we not had a great episode yet, really?) It’s based around the setting of the school festival taking place at Tooru’s high school where the students are participating in various different activities and wearing some questionable outfits, in Yuki’s case. Things go quite smoothly until things are interrupted by a certain half-Japanese blonde guy. Momiji is back! 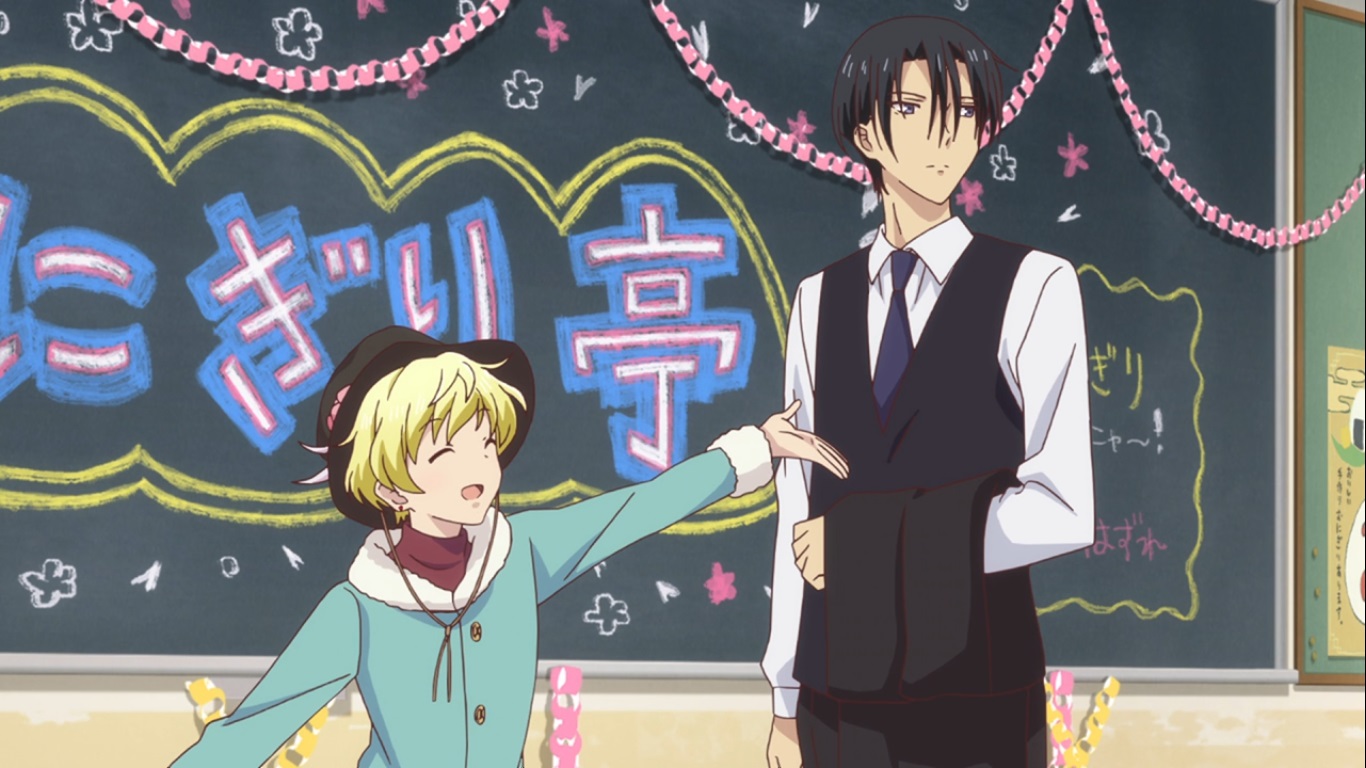 Momiji was first introduced in Episode 3 where I complained about the German subtitles. At that point, I was slightly concerned about how his future dialogue would come across, but I have to say – I absolutely love how he does come across, speaking Japanese yet having some linguistic interference from German. Interrupting the school festival, Momiji certainly creates an entrance for himself and drags the attention away from Yuki onto himself and a second visitor – Hatori. We very quickly learn that Hatori is a doctor as he does begin to examine Yuki in front of everyone in the room, also giving the viewer some subtle insight into Yuki in doing so. Regardless, the main concern in the room at the time comes from Momiji who begins climbing on the stalls and almost revealing the Sohma secret to the entire class. Talk about a stressful time for the Sohmas in the room.

We then get a conversation scene that takes place away from the school festival where we see some more of the relationship between Hatori and Momiji and the other Sohmas. Hatori certainly has a guardian role over Momiji, which is something we also see more of in Episode 7. The relationship between Hatori and the other Sohmas present (Yuki and Kyo) is also quite a serious one. Perhaps this is due to his role of being the family doctor or perhaps this is due to his close relationship with Akito – a figure we don’t really know too much about just yet. Either way, Hatori is clearly not a member of the Sohma clan to mess with. 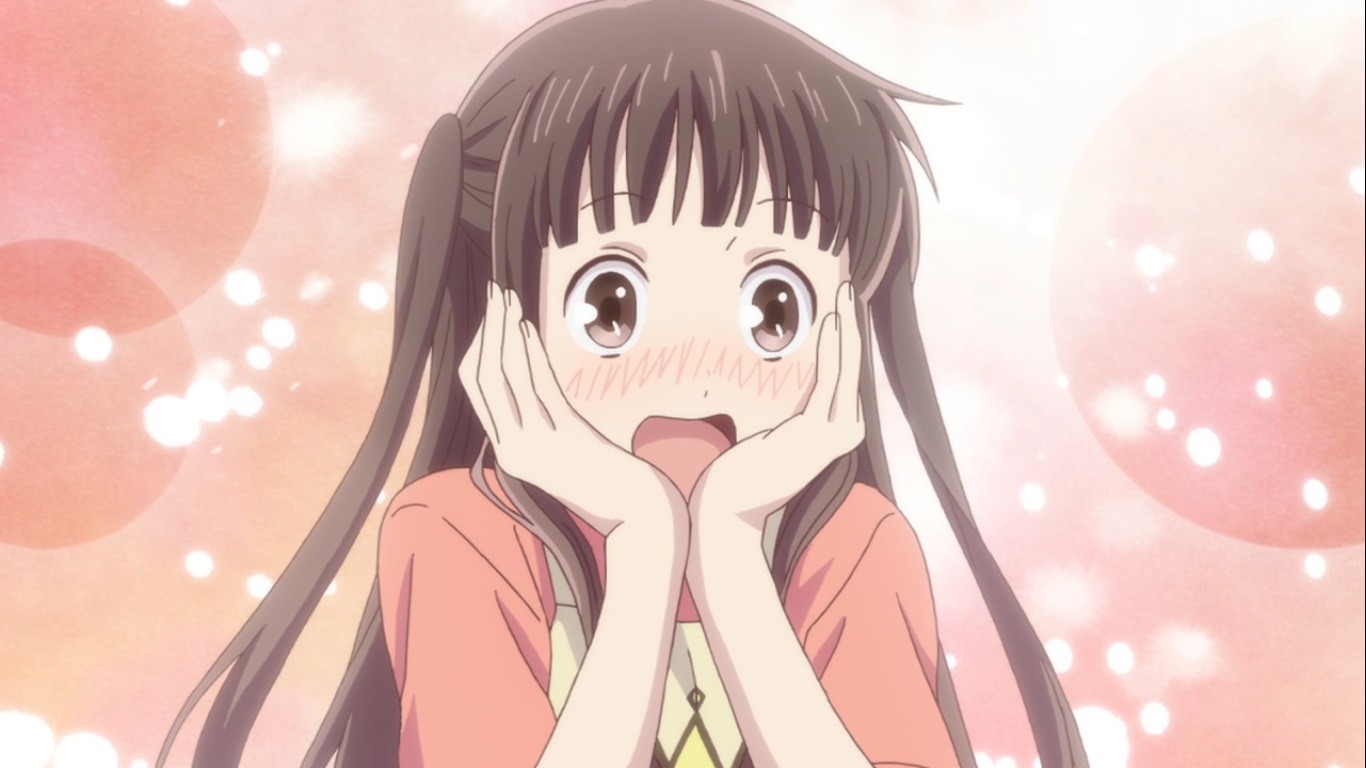 One thing that I loved about the rooftop scene as well is the conversation between Yuki and Tooru when the other three disappear. Not only did it carry a lovely message, as most conversations with Tooru do at this point, but my little fangirl heart went a little bit crazy with excitement with Yuki’s words. What an absolute cutie he is!

The best thing about this episode though, in my opinion, was the inclusion of Tooru’s friends – Arisa and Saki. I’ve said for a long time that these two need more screentime and we finally got some. Woo! I truly think that these two are probably two of my favourite supporting characters of all time as I absolutely love their relationship with Tooru and the concern for each other that they have. They really are like an additional little family and I love how the sleepover scenes really highlighted this. 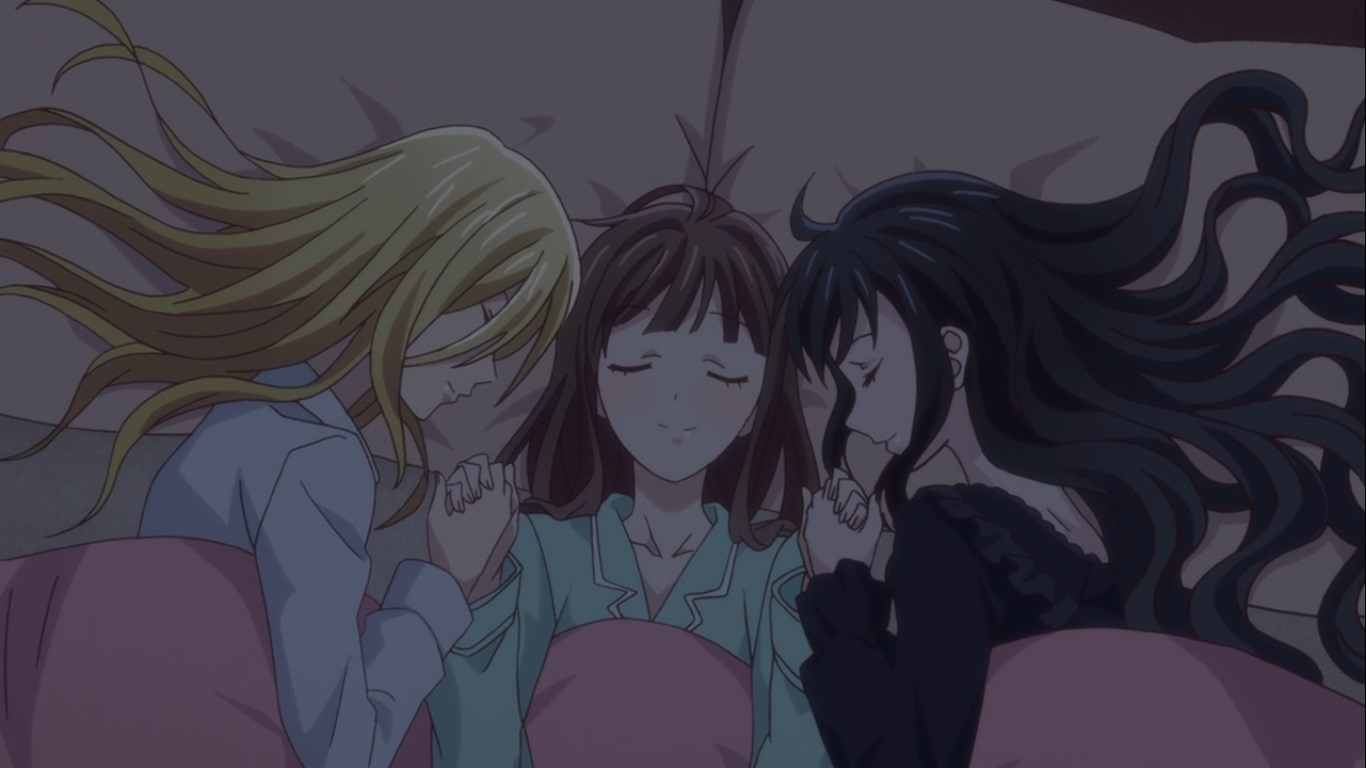 During the sleepover scenes, we also get more backstory involving the hat that has been appearing in a lot of the scenes since the start of the series. The “this was given to me by a boy I liked when I was younger but I don’t know him any more” scenario is very much a trope by today’s standards so I can understand if some people are turned off a little bit by this, but we do have to remember that Fruits Basket is an older series from the late 1990s-early 2000s. Of course, there are going to be tropey moments – it helped create the trope in the first place!

The sixth episode ended with a very suspicious phone call from Hatori asking Tooru to meet him at the Sohma estate, the very location where we first meet Tooru in the next episode. 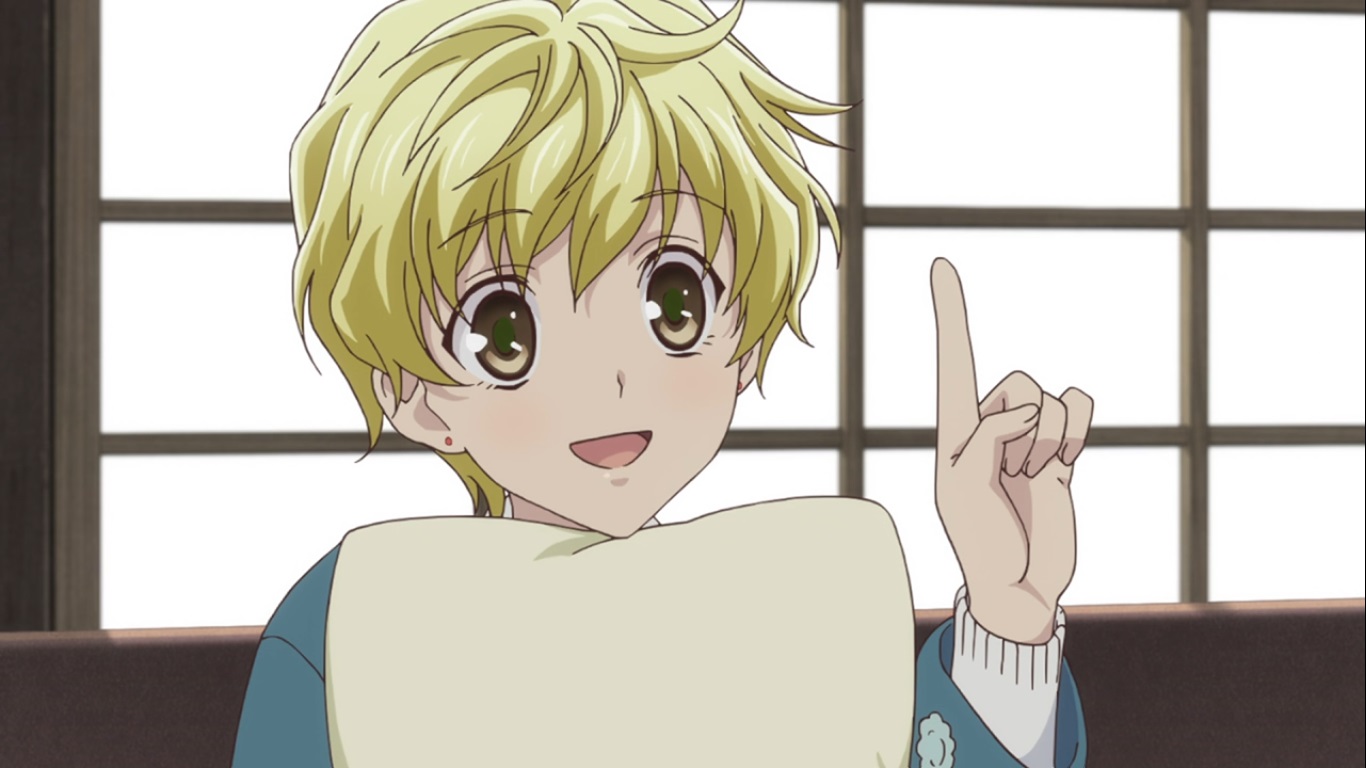 Momiji makes another return to our screens, greeting the very hesitant Tooru at the gate of the Sohma estate. Upon their arrival, Hatori greets them as sternly as ever and he maintains this for the majority of the episode, even becoming quite strict with Tooru as he tells her to move out of Shigure’s house. What? But… she’s only just moved back in! Give the girl a break already. Hatori certainly has his reasons for this, though, and they are somewhat understandable, not that I will mention them here. If you want to know, go watch the episode.

A lot of Hatori’s backstory, however, which was the main feature of the seventh episode, really did hit hard. The melancholic soundtrack that has been so prominent in the show so far was used superbly in the scenes where Hatori’s past was being told to both Tooru and the viewer.  Without a doubt, due to Hatori’s backstory, this has been the most emotional episode of Fruits Basket yet. Hatori is one of my favourite characters from the series, so I’m glad that his emotional past really came through. It’s making me anticipate some of the other backstories a lot more. My tissues will be next to me, that’s for sure. 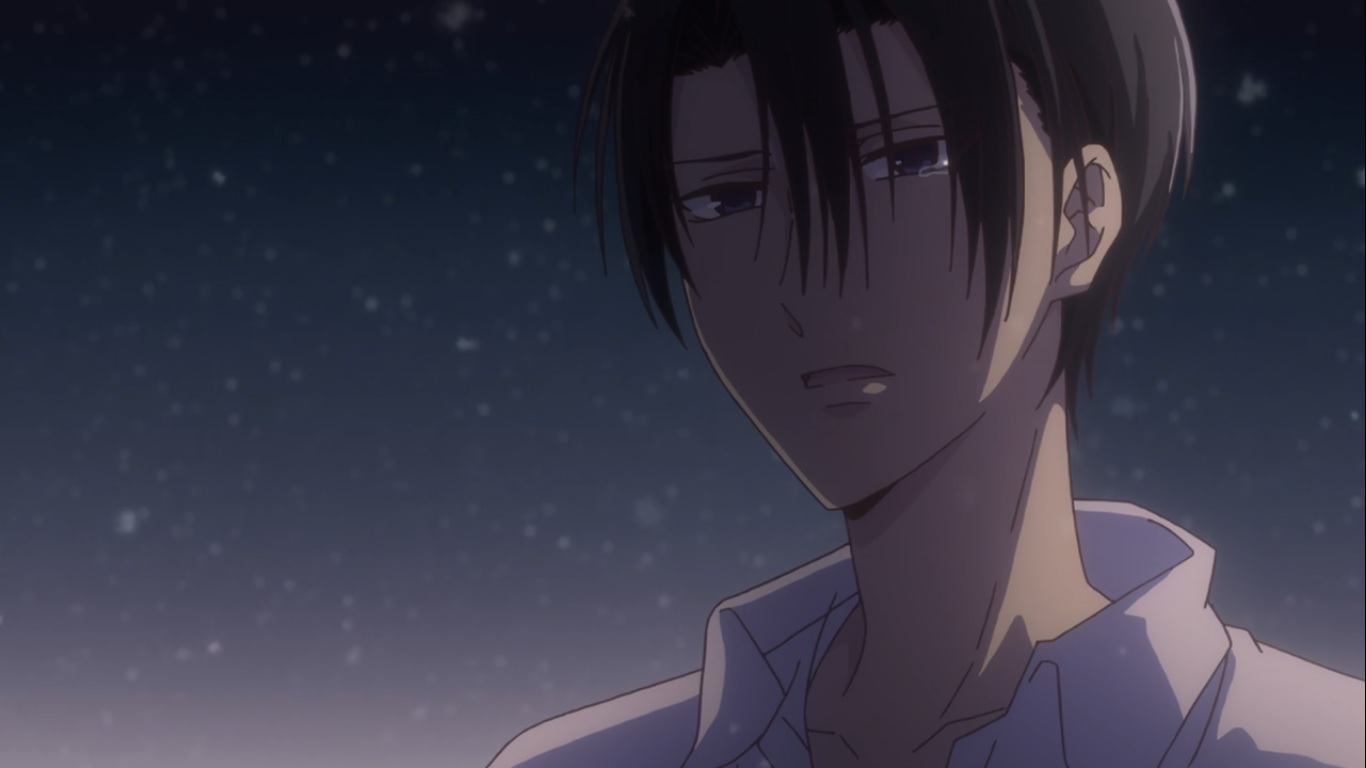 What I will say is that in these two episodes, we learn about Momiji and Hatori’s respective zodiac animals and I’ve also learned that I’ve become somewhat used to the smoke effect that they use when the characters transform. When the show first started, I was a little taken aback and unsure about it, but the more I watch the series, the more it begins to blend in. Is this just me or is this happening for other people too? Because I know that there were some people out there who agreed with me at the start about the smoke effect being very out there.

I think that’s a good place to wrap up this post, as this post is already super long, but what I will say is that I am more than happy with how this Fruits Basket adaptation is going. I do hope the quality doesn’t slip anytime soon because TMS really have managed to keep a good track record with this show so far. It would be a shame to spoil things now.

This post was last updated on 22nd May 2019 in order to fix some grammar mistakes.